Moontaku staff would like to apologize for this blog post being much longer than the usual blog posts on this site, but in our defense, fuck you lol. We got this article for free off of the internet, so we're posting it anyways.

Today, as I was watching our favorite malding streamer Jessie Anime, also known as Moon Moon Underscore Oh Doubleyou, try and play World of Warcraft Classic, it came to my attention that prominent games “““““charity””””” outfit Games Done Quick (GDQ) may be harbouring a dark and deeply problematic set of biases. You see, GDQ doesn’t think that men can get pregnant. 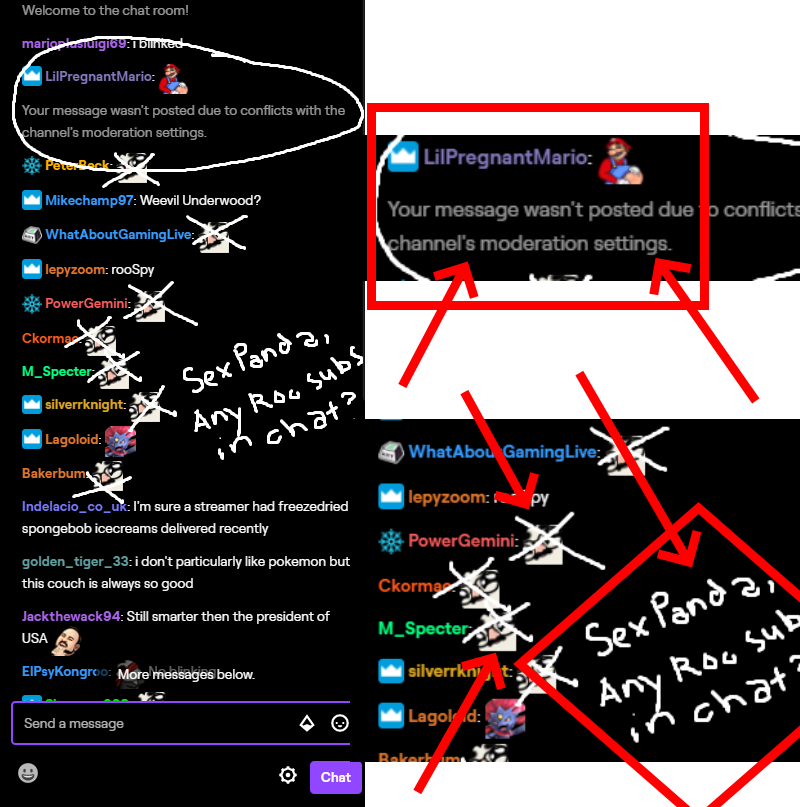 “Your message cannot be posted due to a conflict with """moderation""" settings.”

I felt that, as a prominent game studies scholar who has written about gender and labour in videogame production (PhD candidate at NCSU, lots of publications, self-advertising here) AND as a prominent games journalist, it is my duty to blow the cover on this story and trace a quick history of male pregnancy oppression on twitch.tv.

Some of us may be familiar with Mr. Anime’s twitch chat spamming a certain purple lady face, and that being ALL that they do. But recently, since the Bloodbourne Incident of 2018, Mr. Anime’s emotes have slowly evolved to encompass real social issues, such as dodging arrows in Minecraft, Poop Slugs, and, yes, the ability for our favorite two male plumbers to become pregnant after insertive sex with one another. These emotes have been met with disgust, prejudice, and backlash. Certain GTAVRP streamers have demanded that I, lilpregnantmario, stop spamming moon2PREGARIO and moon2PREGIGI in their twitch chats lest I be banned. In support of their shitty streamer, their twitch chats constantly @’d me with WeirdChamp. I have never felt more excluded. At first, I assumed it was because, as a moon sub, I carry a certain responsibility for my streamer’s actions in the past in GTAVRP. You see, as one of the best roleplayers to have ever existed, Mr. Anime put professional roleplayers from lauded pedigrees such as Arma to shame with his brash, in-your-face, roleplay tactics. But, the more time I spent in certain GTAVRP streamers chats like Koil and Cyr, the more I realized that they are, in fact, sexist pigs.

Though these revelations are problematic and utterly crushing, that people actually unironically believe that men cannot get pregnant in two-thousand-and-fucking-nineteen, I, along with many other moon subs, have bore the brunt of sexist, hypermasculine pig streamers. But today, simply “bearing” that brunt went too far. During the Mario Block of GDQ, subs of Mr. Anime were trying to be supportive of not only the ability for men to get pregnant, but also of the mediocre speedrunning – all for, what we assumed, was the greater good: Doctors Without Boarders. Shortly after the Mario block, though, our greatest fears were realized. When I, lilpregnantmario, attempted to support my male breathren in celebrating male pregnancy, I was met with one of the most jarring messages to have ever occurred on twitch.tv: Your message cannot be posted due to conflicts with moderation settings.

“Wh… what?” I thought to myself. “Surely... this can’t be right.” I reinstalled uBlock Origins and BTTV, just to make sure there wasn’t a technical issue before I settled back in. I unmuted GDQ, only to be met with a moderator reading the five-thousandth message about fucking animals to save pixels. Rolling my eyes, I clicked into the chat box, ready to show my support for male pregnancy. Moon…2…preg…ario, I type. My finger brushes the enter key.

And then it dawned on me. GDQ doesn’t support male pregnancy. If I were any other, less refined and less educated m’gentle’lad, I would have gone straight to reddit to vent my concerns and receive compensatory jerk-off karma and updoots. But, being the god-tier academic that I am, I realized that there was more to this story than just GDQ hating reproductive rights. It was worse. They knew from the past that banning Mr. Anime’s emotes in their chat only attracted more of his subs in a bid to try and show solidarity and ‘not-all-moon-subs’. But, in the past, Mr. Anime’s emotes had not been a socially responsible and bomb-shell as moon2PREGARIO. Today, though, GDQ chose to return to old tactics to solicit views for their SAD speedrunning event by attacking pregnancy of any kind, but specifically, the ability for men to share in the beautiful event of making life. Make no mistake: though GDQ is full of sexist, racist, homophobic pigs, this was not just an attack on reproductive rights that very closely mimics our current president’s hatred of child-bearing bodies. This was a capitalistic power play to solicit donations from social-justice-oriented moon subs.

Did it work? It remains to be seen. We are all trying to heal in the wake of this destructive event, but I believe that it is of vital importance to think deeper and feel deeper than just the surface emotions of feeling oppressed. It is time for gamers to rise up and create our own speedrunning event that won’t ostracize male pregnancy. It is time… for MDGQ: Moon Does Games ( not very ) Quickly.